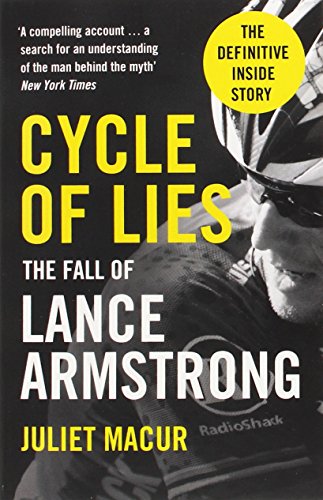 A fly-on-the-wall account of the greatest drama in modern sporting history by the New York Times cycling correspondent.

As Lance Armstrong’s precipitous fall from grace continues, New York Times sports reporter Juliet Macur takes the reader behind the scenes to bring to life the astonishing twists and turns of the scandal that has rocked the world of cycling.

With unprecedented access to the key players in the drama – from Armstrong’s fellow cyclists and top cycling officials to doctors, trainers and wives – Cycle of Lies reveals how Armstrong built a fortress of people around him to protect his image and upend the lives of anybody who stood in his way.

As America’s fallen idol faces potential perjury charges, Cycle of Lies widens the focus to expose corruption at all levels of the sport in a thrilling, page-turning work of contemporary narrative history.


‘Juliet Macur gives us the gory details. The blood bags. The needles. The lawsuits. What a hornet’s nest’ Evening Standard

‘Riveting … Why did he do it?” is clearly the first question begging for an answer. And “How did he get away with it for so long?” is another. Macur investigates both exhaustively and the result is a tale right out of ancient Greece – the demi-god with the fatal flaw’ Toronto Star

‘Macur is a fine writer and a tireless reporter’ Observer

‘Her well-researched book pays testimony to the determination of a large group of people, those used and cast aside by Armstrong, who found the courage to stand up to the bully … That he was still arrogant enough to try to get her to change the title of ‘Cycle of Lies’ speaks volumes for his self-centred nature and Macur’s determination as a journalist to stick with what she believed to be the truth’ Eastern Daily Press

‘Macur offers plenty that is new and is capable of holding your interest … Compared with the other recent Armstrong books – ‘The Secret Race’, ‘Seven Deadly Sins’ and ‘Wheelmen’ – ‘Cycle of Lies’ is the one to read if you want the whole story nailed in a clear and concise narrative … But it is also a book that can be quite subtle at times and contains moments of beauty … a rewarding read’ Podium Cafe

From the Back Cover


The definitive account of Lance Armstrong's spectacular rise and fall.

In June 2013, when Lance Armstrong fled his palatial home in Texas, downsizing in the face of multimillion-dollar lawsuits, Juliet Macur was there--talking to his girlfriend and children and listening to Armstrong's version of the truth. She was one of the few media members aside from Oprah Winfrey to be granted extended one-on-one access to the most famous pariah in sports.

At the center of Cycle of Lies is Armstrong himself, revealed through face-to-face interviews.

But this unfolding narrative is given depth and breadth by the firsthand accounts of more than one hundred witnesses, including family members whom Armstrong had long since turned his back on--the adoptive father who gave him the Armstrong name, a grandmother, an aunt. Perhaps most damning of all is the taped testimony of the late J.T. Neal, the most influential of Armstrong's many father figures, recorded in the final years of Neal's life as he lost his battle with cancer just as Armstrong gained fame for surviving the disease.

In the end, it was Armstrong's former friends, those who had once occupied the precious space of his inner circle, who betrayed him. They were the ones who dealt Armstrong his fatal blow by breaking the code of silence that shielded the public from the grim truth about the sport of cycling--and the grim truth about its golden boy, Armstrong.

Threading together the vivid and disparate voices of those with intimate knowledge of the private and public Armstrong, Macur weaves a comprehensive and unforgettably rich tapestry of one man's astonishing rise to global fame and fortune and his devastating fall from grace.


Juliet Macur is a leading sports reporter for The New York Times. Since 2004, she has covered the Olympics and Olympic sports, doping and legal issues for the paper. She has been at the forefront of reporting the Lance Armstrong story. She lives in New York City.